Recent Advances on the Glass Problem

Over the last decade, theoretical advances have provided an exact solution to the glass problem in the limit of infinite spatial dimension. Interestingly, the dynamical arrest this work predicts is consistent with the mode-coupling theory of glasses, and the ensuing entropy crisis at the Kauzmann transition with the random first-order transition scenario. However, what survives of these features and what other processes contribute to the dynamics of three-dimensional glass formers remain largely open questions. In this talk, I present our recent advances toward a microscopic understanding of the finite-dimensional echo of these infinite-dimensional features, and of some of the activated processes that affect the dynamical slowdown of simple yet realistic glass formers.

Bio: Patrick Charbonneau is professor of chemistry and physics at Duke University. Originally from Montreal, he obtained a Ph.D. in chemical physics from Harvard University in 2006 and was then a Marie-Curie Fellow at Amolf, in Amsterdam, before moving to Durham in 2008.

Charbonneau's main research is in the fields of soft matter and statistical physics. Using theory and numerical simulations, he notably studies colloidal and protein self-assembly and is a founding investigator of the Simons Collaboration on Cracking the Glass Problem. He has thus far authored more nearly 100 peer-reviewed publications and co-organized a number of international meetings on these topics. A science history enthusiast, he helped curate the exhibit Seeing the Invisible: 50 Years of Macromolecular Visualization, and is leading the oral history project The History of Replica Symmetry Breaking in Physics. Once in a while, he also gets to teach a course on the science of cooking. Since joining Duke, Charbonneau has earned a National Science Foundation CAREER Award, a Sloan Fellowship, and an Oak Ridge National Lab Ralph E. Powe award, and been granted various visiting scientist positions. 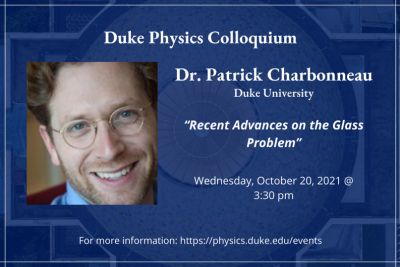