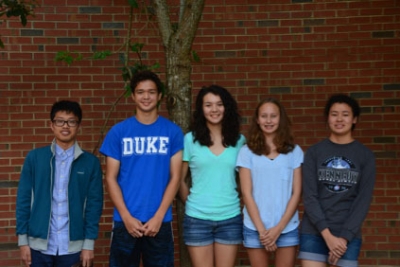 The Behringer Lab has been the science home for high school and undergraduate students over the years. Last year, high school students Meredith Cox, Kevin Liu, and Matthew Zheng, and undergrad Melody Lim actively participated in research in the Behringer lab, where each carried out their own research experiments, with mentoring from Ph.D. students and post-docs in the group. This summer’s group, pictured at right, include Meredith Cox, and in addition, visiting scholar Ding Jingqiu, Noah Cox, Lauren Behringer, and Stella Wang who each are working on their own research projects. These students have been outstanding additions to the lab, and also have some major achievements.

Several will be starting at prestigious universities this Fall, including Meredith Cox at Columbia, Kevin Liu at the University of Pennsylvania, and Kevin Liu at Yale. Melody Lim, a Duke Physics major, will begin graduate school at the University of Chicago this Fall. Meredith participated in the INTEL science competition for high school students, based on her research project at Duke, and she was named a semi-finalist. Both Meredith and Melody presented their work at American Physical Society meetings (DFD and the March 2016 Meeting). Meredith and Melody are first authors on papers that have been submitted to prestigious physics journals.