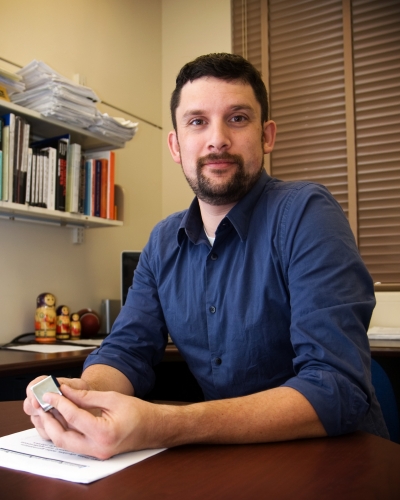 Physicist Phil Barbeau builds detectors to look for rare events in nuclear and particle physics. He says, “We use very standard particle-detection techniques that are taken to the extreme. In general, all of these experiments are so sensitive that a single fingerprint left behind on the detector can blind it.” Barbeau, currently a post-doc at Stanford, will be joining the Duke Physics faculty and the Triangle University Nuclear Laboratory (TUNL) on August 1. He searches for neutrinoless double beta decay, coherent-neutrino nucleus scattering, and dark matter. “It can be difficult to get all three topics into one conversation,” he says, “until you realize that the underlying connection is really about innovative detector technology and development.” Barbeau thrives on the creative thinking necessary to design and build new detectors, and is looking forward to sharing that with Duke students. “Wherever I’ve been I’ve enjoyed teaching physics in the laboratory and doing research with the students,” he says. “Detector development allows you to employ students at all levels—high schoolers, undergraduates, graduate students, postdocs—such that they can all have impact on the final results of the experiment.” An added benefit: “If you do a good job teaching students they become very powerful researchers in their own right and start to benefit your research in a very positive way.”

All of Barbeau’s experiments take place underground to shield them from cosmic radiation. He’s put detectors in a variety of places—including in the salt mines of New Mexico where nuclear waste is stored, within 25 meters of the core of a nuclear reactor, and in the sewers of Chicago. “All of them were interesting in their own way,” he says. Then he adds: “Sewers were less interesting.” At Duke, Barbeau intends to use the Kimballton Underground Research Facility (KURF) in a limestone mine near Blacksburg, Virginia, which he considers “very close.” He says, “It’s much easier if we don’t have to travel across country to go underground.” Neutrinoless double beta decay is a particular kind of radioactive decay that has been predicted but not observed. If it is observed, it would prove neutrinos to be Majorana particles—that is, particles that serve as their own anti-particles. It would also provide information that would help physicists calculate the mass of neutrinos and maybe help explain why they have so much less mass than any other type of particle. The detectors used by Barbeau and his colleagues on the EXO experiment (Enriched Xenon Observatory) are filled with more than 100 kilograms of liquid xenon enriched with xenon 136, which decays to barium 136. The xenon 136 serves as a source for the decay and as the medium with which to detect decay. “Ultimately, we would like to marry that particle physics technique with an atomic physics approach to tag the barium daughter ion, which would give us a paradigm-shifting zero-background experiment,” Barbeau says. “That’s an example of how you take standard particle physics experiment to the extreme.” Another rare event Barbeau looks for is coherent neutrino-nucleus scattering. “The process is predicted as part of the Standard Model of particle physics—it was predicted 40 years ago, but so far it’s been unobserved because we haven’t had adequate detection.” Barbeau hopes to help change with his large-mass (about 1.2 kilograms), low-background, ultra-low threshold detectors. “Measuring the strength of this process will allow us to perform some very sensitive tests of physics beyond the Standard Model,” he says. Barbeau also uses the coherent scattering detectors to search for dark matter, such as hypothetical particles called axions and WIMPs (weakly interacting massive particles). The same type of detectors may one day have applications for homeland security as well, in an area called nuclear reactor safeguards. The detectors could be used to look for illicit diversion of nuclear fuel rods by keeping track of nuclear fuel in reactors through neutrino detection and monitoring. Of the driving force behind his work, Barbeau says, “I’m interested in searches of rare events in neutrino and astroparticle physics because oftentimes these rare events can have a big impact on our understanding of physics and the world around us.” He says, “To be in this field you have to be a little bit crazy, because of the extreme nature of a lot of what you have to do—to make sure that you don’t leave any fingerprints on the detector, to get rid of all the dust. Sometimes you have to grow copper for your experiment underground so it doesn’t get activated by radiation at sea level.” But for Barbeau, any tedious aspects of building these detectors are far outweighed by the enjoyment he gets from the creative process of designing them, and the chance to extend the experimental reach of physics. “The goal,” he says, “is to perform measurements not previously possible.”