Edward George Bilpuch, a distinguished experimental scientist in nuclear physics and the first Henry W. Newson Professor of Physics at Duke University, was born in Connellsville, PA. in 1927. After serving two years in the Navy, he enrolled at the University of North Carolina (UNC) in Chapel Hill on a football scholarship, and earned his BSc in Physics in 1950. During a whole year, he played football in varsity games for UNC. He then continued at UNC as a graduate student in Physics, and was a member of the first class of Morehead scholars. He conducted his thesis research in experimental nuclear Physics under the mentorship of Henry W. Newson at Duke University. He received his Ph.D. degree in 1956 and received an offer of a position at the Los Alamos National Laboratory. However he accepted Henry Newson’s offer to become a Research Associate in the Duke nuclear physics laboratory and he was appointed Assistant Professor in 1962. Under Newson he became Deputy Director of the Triangle University Nuclear Laboratory (TUNL). Newson had been instrumental in creating this laboratory to form a coordinated group of nuclear physicists from the three major universities in the Research Triangle – Duke, NC State University and the UNC at Chapel Hill. In 1978, Bilpuch became Director of TUNL, which he helped to develop and which is now a U.S. Department of Energy Center of Excellence in Nuclear Physics. Until his retirement in 1992, he ran a very vigorous research program, largely in collaboration with Gary Mitchell at NC State University, and afterwards continued to be active at TUNL and with selected research projects until health issues slowed him down. He died of heart failure on September 16, 2012.

Bilpuch made major contributions in his study of the structure of the atomic nucleus and was internationally recognized for his contributions to high-resolution nuclear spectroscopy. Possibly the most spectacular series of experiments were those with his graduate student Jay Keyworth on isobaric analogue states in the nucleus, where a proton beam with an extremely high energy resolution of 0.25 keV was used in their measurements. This was by far the best resolution achieved in a nuclear physics experiment in the world in the middle sixties, and measurements by his group continues to be among the highest resolution nuclear structure data available.

Bilpuch trained more than 50 graduate students, several of whom became prominent in the field of physics and in other areas. He was known for his warm personality and devotion to helping students and junior colleagues become successful. The picture with his UNC and NCSU colleagues Eugen Merzbacher and Worth Seagondollar shows him in one of the laboratory rooms of TUNL. 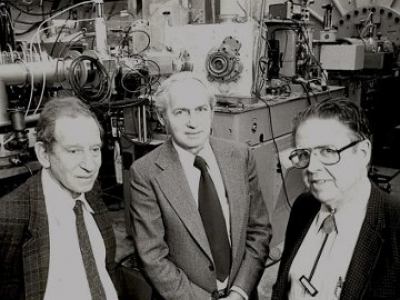 During his time as TUNL director, Bilpuch initiated substantial interactions with physicists in Saudi Arabia and China, countries to which he traveled several times to establish connections with TUNL. In particular, he started major collaborations with Chinese physicists. As a result of his great impact on nuclear physics research in China, he received an honorary degree from Fudan University in Shanghai. Bilpuch continued and accelerated the tradition of inviting foreign scientists to work at TUNL, and forging many links with former long-time visitors. For his outstanding research and directorship he was honored by receiving the Jesse Beams Award of the Southeastern Section of the American Physical Society, and he also received an honorary degree from the Goethe University in Frankfurt, Germany for his long-term collaboration with the nuclear theorists at that university, in particular, Prof. Walter Greiner who became a close friend.

In 1949 Bilpuch met on a blind date his future wife, Marilyn Jean Strohkorb. This was on a trip when the UNC football team was playing a game against Notre Dame, and one of Edward’s team mates was Charlie Justice, a famous player. (UNC lost that game, however!). Marilyn was a newspaper reporter in Norfolk, Virginia. After a courtship of three years, Edward and Marilyn were married and she took a job of legal assistant in Chapel Hill, where Edward was a graduate student. They had a long and happy marriage, and although they had no children, the graduate students and postdoctoral associates of Edward were their family. They also had a succession of collies and were avid birdlovers. 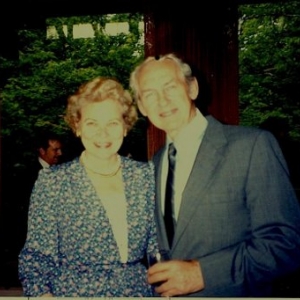 The numerous professional friendships Bilpuch made were deep and lasting, and included scientists in several countries, reflecting the recognition TUNL was receiving internationally. One of the scientists was Hashim Yamani, of Saudi Arabia, at that time a professor at the King Fahd University of Petroleum and Minerals in Dhahran. He was a physicist with degrees from the U. California, Berkeley and Harvard. When Bilpuch was invited the first time to visit Saudi Arabia for the purpose of collaboration, he managed at the last moment, after his insistence, to get permission to have Marilyn accompany him. On subsequent trips to Saudi Arabia, this permission came easily. Prof. Yamani, who in time was appointed to a succession of prestigious positions in the Kingdom, became a close friend of Edward and Marilyn and kept in touch with them.

Another close friend was George Rogosa who, after his retirement from his position as grants program director at the Atomic Energy Commission, moved to Durham in 1978 at the invitation of Bilpuch. He became a beloved undergraduate teacher in the Duke Physics Department and after he retired from teaching and his mental health deteriorated, Bilpuch visited him regularly and took care of several of his needs.