William Delany Walker, a prominent experimentalist and theorist in elementary particle physics, was born on November 23, 1923 in Dallas, TX, was raised there and went to the Rice Institute (now Rice University) in Houston, obtaining his degree in Physics in 1944. He then worked as a commissioned officer in the US Navy on far-infrared detection at the US Naval Laboratory until the end of World War II. He then went to graduate school at Cornell University, where he did research on cosmic-ray physics and obtained his Ph.D. in 1949, studying with Richard Feynman and Hans Bethe and Kenneth Greisen (who supervised his thesis work). After teaching briefly at Rice, at the University of California, Berkeley and at the University of Rochester, he was appointed in 1957 to a faculty position at the University of Wisconsin Madison. There he served as Chairman from 1964 to 1971. He left for Duke University in 1971, became again Chairman from 1975 to 1981, and was named James B. Duke Professor in 1990. He retired in 1994 but still remained active in his research, continued publishing articles and giving invited lectures. He died of cancer on April 8, 2010.

Walker’s career was a very distinguished and productive one. In the early 1960s, he co-discovered the rho meson, one of only a few subatomic particles then known to exist at the time. This discovery, along with other observations of excited states of hadrons, led to the formulation of SU(3) flavor symmetry of mesons and baryons, and to confirmation of the quark model of hadrons. Walker made continuing contributions to the emerging field of Quantum Chromo-dynamics with the discovery of several other hadronic particles including the Sigma-zero hyperon. He was also proud of his work on hadron-nuclear interactions yielding hadronization times and also worked on elementary particle reaction characteristics at Tevatron energies. Walker was also project director for the construction of the 30-inch hydrogen bubble chamber that was used at Argonne National Laboratory and later for the early experiments at the Fermilab Tevatron. At Duke, where he built up a high energy physics group, he continued to make innovative contributions to elementary particle research through the use of hydrogen and heavy-liquid bubble chambers. He also worked on multi-particle processes and interpreting them in terms of quantum chromodynamics. In his later years his theoretical work involved analyzing multiplicity distributions of high energy hadron interactions. He was the senior member of the Duke particle physics group which included several faculty members, among them his former graduate student Alfred Goshaw. Over the course of his physics career, Bill mentored over fifteen PhD students and published more than 150 journal articles. (Download list below)

Bill married Suzanne Porter, in 1946, and they had three children: Nancy (a violinist), Elizabeth (in Christian ministry), and Samuel (an attorney). In 1975, he married, Constance (Connie) Kalbach. The picture shows him and Connie at a Physics party in the 1980s. 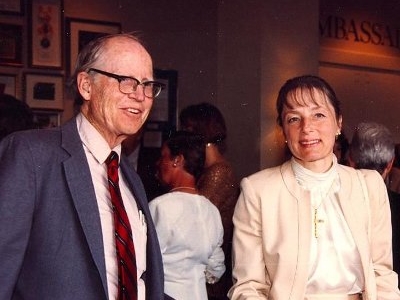 Bill Walker’s interests were far broader than physics, yet the pieces fit together to form an integrated whole. His life was transformed when he was in his mid-thirties, as his once-nominal and neglected Christian faith took on vibrancy and substance. With his academic background, he soon found himself taking seminary courses over the summer, earning (as he often joked) his “merit badge in theology.” He was ordained to the ministry and served in the leadership of a number of evangelical congregations, most recently at The Church of the Good Shepherd in Durham. His faith and physics came together as he and Connie, a senior research scientist in the Physics Department, gave talks in campus and church settings on the amazing harmony they found between the Bible and science. Together, they wrote a forty-page booklet called The Heart and Hand of God: Perspectives on Christianity and Science, designed largely to help college students struggling with these issues.

Bill also wanted to apply his science background to societal issues. Thus he became a strong advocate for the careful, responsible use of nuclear energy. In the 1980’s, he and his wife Connie co-authored two sets of op-ed articles on the subject for the Durham Morning Herald (now the Durham Herald-Sun). Bill later wrote other articles plus a number of letters-to-the editor.

Bill’s well-known enthusiasm for tennis began while still a youngster, and at Rice he was the top player on the varsity team. He took part in (and won!) many state and local tennis tournaments until he was in his early eighties. In spite of his declining health, he continued to get out on the courts until a few months before his death.

Bill had two favorite vacation places: Jekyll Island, Georgia in the winter and the area north of Durango, Colorado in the summer. Both afforded ample opportunity for walking or hiking in the beauties of God’s creation.

[The non-professional part of this essay has been contributed by Constance Kalbach Walker.]