Fritz London, one of the most distinguished scientists on the Duke University faculty, was an internationally recognized theorist in Chemistry, Physics and the Philosophy of Science. He was born in Breslau, Germany (now Wroclaw, Poland) in 1900. In 1933 he was forced to resign his post at the University of Berlin by the advent of the Nazi regime. He left Germany for England, then for France where he was appointed "Maitre de Recherches" at the College de France (later becoming "Directeur de Recherche'). He immigrated to the United States in 1939, and came to Duke University, first as a Professor of Chemistry. In 1949 he received a joint appointment in Physics and Chemistry and became a James B. Duke Professor. In 1953 he became the 5th recipient of the Lorentz medal, awarded by the Royal Netherlands Academy of Sciences, and was the first American citizen to receive this honor. He died in Durham in 1954.

London's early work was in philosophy, and he presented his original dissertation at the age of 21 at the University of Munich. Sensing fundamental advances happening in physics, he begin its study, working under Born, Sommerfeld and Schröedinger in Munich and Zürich. His joint 1927 paper with Heitler gave the quantum mechanical explanation of the homopolar bond in the hydrogen molecule, marking the beginning of modern quantum chemistry. At the University of Berlin, he wrote about the mechanism of chemical reactions and about the quantum mechanical interpretation of the Van der Waals forces. His predictions in the field of low temperature Physics have deeply influenced the development of the fields of superconductors, quantum fluids and quantum solids. At Oxford University in 1934, he developed with his brother Heinz a phenomenological theory of superconductivity. In 1938 in Paris, he recalled the doubted Bose-Einstein statistics prediction of strange condensation phenomena in an ideal gas. Using this prediction, he took a major step towards the explanation of the superfluid state in liquid He-4. With E. Bauer he published in 1939 an important article: "The theory of the Observation in Quantum Mechanics" which returned him to his interests in philosophy. At Duke University, London predicted that in its fluid phase the light helium isotope 3He should show a different type of degeneracy from that of 4He, and typical of a substance with Fermi-Dirac statistics. This prediction was confirmed shortly before his death by experiments at Duke University. More recently his prediction of the magnetic moment of a rotating superconductor, the "London moment", of great importance in a Space flight (gravity probe B), was confirmed. His predictions on the properties of systems with Bose-Einstein and Fermi-Dirac statistics have been extensively used in the investigations of ultra-cold atoms and molecules in the nineties and beyond.

At Duke University, London taught advanced courses in quantum mechanics, quantum chemistry and statistics. He was a devoted teacher to his small audience of graduate students in Chemistry. They were keenly aware that their instructor was someone directly involved with the advances in the field of quantum chemistry, and held him in the greatest respect. London did not have graduate students of his own, preferring collaborating in his research with colleagues and postdoctoral associates. A valuable insight into London's teaching at Duke is given by Frank Field, one of his former students. 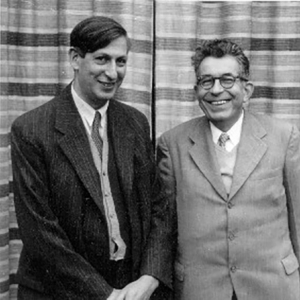 Detailed information on Fritz London can be found in the following sources: Biographies "Fritz London : A scientific biography" by Kostas Gavroglu includes both his life and a scientific analysis of his work. A further book with a chapter on F. London and with detailed descriptions of his work on superconductivity and superfluidity is "The Cold Wars: A History of Superconductivity" by Jean Matricon and Georges Waysand. The essay by P.W. Anderson on Fritz London (download below) is also of great interest. An April 2011 article by Stephen Blundell of the University of Oxford (download below) describes in detail the collaboration of the brothers Fritz and Heinz London.

Correspondence: London corresponded with the leading Chemists, Physicists and Biologists of his time. Their letters, and drafts of London's replies, as well as correspondence with his publisher, Wiley and other correspondence are filed in the F. London Archives at Duke University.

Lecture and Prize in honor of F. London: To honor the memory of London, an annual endowed Memorial Lecture, is given at Duke University by distinguished physicists and chemists. In 1957, senior members of the international physics community established the Fritz London Memorial Prize. It is awarded on the first day of each International Conference on Low Temperature Physics, held every three years.