Anselm Vossen: What Holds the World Together? 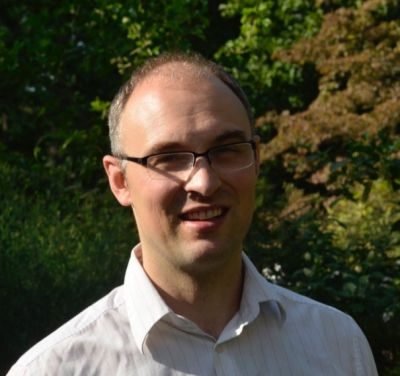 Physicist Anselm Vossen has something in common with Goethe’s Faust: he wants to know what holds the world together. “In Germany, we like the poet Goethe,” Vossen says. “In Faust, there’s a quote: ‘So that I may perceive whatever holds/The world together in its inmost folds.’”

Unlike Faust, who sold his soul to the devil in exchange for knowledge, Vossen is using the tools of physics  to try to understand the forces that hold the nucleus of an atom together. Vossen will be joining the Duke faculty as an assistant physics professor in January 2018.

“We have all this visible matter around us, but we don’t really understand it,” he says. “There are protons and neutrons made of quarks, and gluons hold the quarks together, but we know very little about the structure and about how it actually works.”

Quantum chromodynamics (QCD) has been generally accepted as the theory that describes the strong force that holds visible matter together. But the structure of protons and neutrons is so complex that a consistent description has eluded physicists thus far. That may be changing in the coming years. “We have this confluence of mathematical techniques and computer power and precision experiments,” Vossen says. “It’s exciting stuff we haven’t done before.”

Vossen is interested in how quarks move and interact inside protons, and he is hoping to gain important insights from a new generation of high-precision experiments.

Up to now, experimentalists have struggled to extract information about the three-dimensional dynamics of quarks in the proton. One approach is to scatter electrons off the proton at energies high enough to break it up and then observe the resulting quarks and gluons.

The problem is that quarks have a property called “color,” and a fundamental tenet of QCD is that objects with color always attach themselves to other quarks and gluons to form hadrons, where every color component is cancelled by its opposite. So it is fundamentally impossible to observe a quark in isolation.

Vossen is working on a new experiment at the Jefferson National Accelerator Facility in Virginia, which has recently upgraded its electron beam to 12 GeV—twice its previous energy. In the new experiment, the electron beam will dislodge a quark from a proton. The quark will immediately grab one or more gluons to create a spray of hadrons. By measuring properties of the resulting hadrons, it will be possible to infer properties of the initial quark. In order to do so, Vossen is working on another experiment at the Belle II detector at the KEK facility in Japan. In that experiment, he and others will start with quarks with very well defined properties and then measure hadrons created by them.

In five to ten years, Vossen expects to have a good set of high-precision data from both experiments that will illuminate the structure of the proton and the forces that hold it together. The property Vossen is most interested in is the transverse polarization of quarks inside protons. “With the dataset we hope to collect at Jefferson Lab, together with the dataset in Japan, we can pin down the distribution of the transverse polarizations of these quarks very precisely,” he says.

He wants to compare these observations with the results of computer calculations that simulate the forces among quarks in protons. These calculations are newly possible due to powerful supercomputers and to a technique called lattice calculation, which simulates interactions among quarks and protons as the interactions evolve over time. Transverse polarization is one of the few quantities physicists can calculate precisely using this method.

“This will be the first time we can measure one of these quark-based properties of the proton and compare it to the calculations,” he says. “That will be exciting. Either it agrees, which means for the first time we know we have a handle on these things, or it disagrees, which means we have a very serious problem with our understanding of the proton.”

Vossen and his wife, who are parents to a one-year-old son, are also excited to be moving to Durham, which struck them as hospitable and family friendly when they visited. Vossen, who is coming to Duke from New York (he was most recently at Brookhaven National Lab), is glad to be moving to a smaller and more manageable city than New York. “We look forward to living in a town where you know your neighbor,” he says.

Vossen was attracted to Duke Physics by the quality of faculty and students; the facilities at TUNL (Triangle Universities Nuclear Laboratory); and the proximity to Jefferson Lab. In fact, his position is a joint one between Duke and Jefferson Lab. Haiyan Gao, the Henry Newson Professor of Physics, says, “I very much look forward to collaborating with Anselm. His joining Duke Physics will enhance the department’s position in QCD physics and position us strongly in the era of 12-GeV physics at Jefferson Lab.”