Bringing Together Physics, Neuroscience and Dance 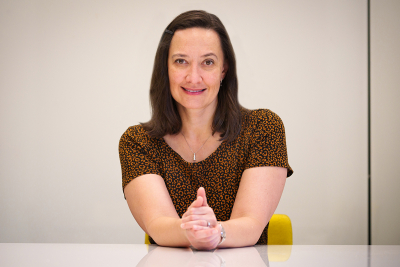 Svetlana Monroe is bringing her love of teaching – and her wide-ranging interests – to the Department of Physics.

There probably aren’t too many people in the world who have earned a Ph.D. in physics and an MFA in dance. It’s a safe bet there’s only one who has earned both of those degrees and then conducted neuroscience research. That person is Svetlana Monroe, who is joining the Department of Physics this fall as a lecturer.

Monroe has helped build a polarized proton target for a high-energy collider, published scientific papers in both experimental and computational neuroscience, competed as a rhythmic gymnast, and danced and choreographed at a high level.

But most of all, she loves to teach. Especially physics.

“I’ve been teaching introductory physics for many years in many places, and this is what I like to do,” she says. “This is what I’m really good at.”

Monroe says teaching introductory classes keeps her on her toes. “When students are not experienced,” she says, “oftentimes questions from them are harder to answer than questions that come from more [advanced] students.”

She also enjoys sharing physics with nonmajors. “I like to see how some of them change their minds about physics — from being an annoying requirement to being something fundamental and interesting,” she says.

Monroe came to the United States in the mid-1990s to study high-energy experimental physics at the University of Michigan. At the same time, she took dance classes, building on a lifelong love of dance. From childhood through college in the Soviet Union, she participated in rhythmic gymnastics, which she describes as a “cross between dance and circus,” and upon arriving to United States she took up modern dance.

Near the end of her doctoral studies, she realized she didn’t want to spend her life in a high-energy experimental physics lab. She was attracted to physics in the first place out of what she calls a “romantic desire to know how the world is built,” but her daily routine in the lab wasn’t very romantic. She felt like a combination plumber, car mechanic and electrician.

So, she decided to get an MFA in dance and become a professional choreographer. An anatomy class required for the MFA degree soon led to another detour. “What I liked was not muscles and bones,” she says, “but the neural system, the brain, the neurotransmitters, how cells communicate.”

She completed both her graduate degrees and spent the next several years doing neuroscience research at the University of Michigan, the University of Washington and Towson University while also teaching physics and collaborating with dance groups — and occasionally both, including a project to teach physics to K-12 students through dance.

“I have a history of being involved in designing cross-disciplinary courses — physics and other sciences like neuroscience, and also physics and the arts,” she says. “Fusing these worlds is very fulfilling.”

Monroe came to Duke in 2020 as assistant vice president for research in the Office of Research and Innovation, where she worked on a variety of projects including technical writing for the marketing team at the Duke Office for Translation & Commercialization, helping groups at the Social Science Research Institute with data management logistics, and involvement with organizing Duke Research Week, among others. She also wrote a monthly column for the Duke Research Monthly.

Last fall, she teamed up with Bill Seaman, professor of Art, Art History and Visual Studies, to teach a class called Intro to Neuroscience, Physics of Perception, and Interactive Computation via Art. Members of the class, a mixture of artists and scientists, produced five works of art that incorporated scientific principles related to sensory perception.

One of the students was Simone Barros, a filmmaker in the Master of Fine Arts in Experimental & Documentary Arts program. Barros, who enjoys listening to Radio Lab, watching Nova programs, and reading Oliver Sacks and Brian Greene, was looking for ways to incorporate rigorous science into her motion-picture art.

Barros describes Monroe as an energetic and enthusiastic teacher, adept at explaining scientific concepts to artists with little scientific background while being able to go deep with science majors. “She could break down Schrodinger’s equation,” Barros says. “And it was a phenomenal moment in class when she did that.”

After working in the Office for Research and Innovation for two years, Monroe realized she really missed teaching physics. Now that she’s a member of the Physics department, she’s excited about being in the classroom, attending seminars and bumping into colleagues in the hall who might take the opportunity to share a recent development in their research.

“I want to get back to interacting with students and a more academic life,” she says. “Being in a science environment surrounded by students and colleagues — that’s what I’m most looking forward to.”