Closing the Door on the Behringer Lab 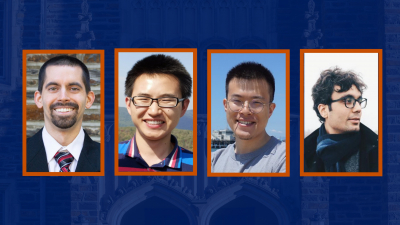 The last four students of the Behringer lab, who graduated after his passing. From left to right: Ryan Kozlowski, Yuchen Zhao, Yiqiu Zhao, and Aghil Abed Zadeh.

When a lab is shut down, something big has ended. A cycle of activity has ceased. Some cycles end abruptly while others reach slow and carefully-orchestrated conclusions. In the case of the Behringer Lab, both types of endings were simultaneously true.

On July 10, 2018, Duke lowered its flags to mark the passing of Robert Behringer, James B. Duke Professor of Physics. Behringer was an active researcher, with a lab full of graduate students and postdoctoral researchers. Three years later, the last of his graduate students, Ryan Kozlowski, defended his doctoral dissertation, marking the end of an extraordinarily influential research line in the Physics department.

Behringer’s passing in 2018 came as a shock to his students. Kozlowski, who was about to start his third year, had been meeting with Behringer regularly to prepare his preliminary exam when Behringer left for the hospital.

Yuchen Zhao, in his fourth year at the time, says that his roommate was the one to give him the news.

“He told me first thing, ‘Did you check your e-mails this morning?’ He showed me the message, and my mind just went completely blank,” he said.

Another student in his cohort, Yiqiu Zhao, remembers Behringer telling him that he had to go to the hospital for some exams, but didn’t give him reason to worry. It was the last time he saw him.

Aghil Abed Zadeh was in his fifth year, close to finishing. He had been at a workshop in Boston and scrambled back to Durham in a hurry as soon as he received the news.

In a matter of two weeks, these students went from a defined Ph.D. path to being forced to make tough decisions about their future, all while grieving their professor and mentor.

“There was a huge grief, and a sense of loss, and a sadness of not having had the chance to work with him as extensively as other people were fortunate enough to,” said Kozlowski.

Faculty in the Physics department immediately stepped up to provide support in whatever way they could, while Behringer’s extensive connections and immense reputation outside of Duke ensured his students were well supported in their area of research.

“It was impressive,” Zadeh said. “A few days after Bob (Behringer) passed away, the chair of the department at the time, Warren Warren, had a meeting with all of us and several faculty, and gave us a briefing of what was happening. The whole department created a support network.”

“They gave us a lot of reassurance about the process, explained that our lab wouldn't be removed, that our equipment wouldn’t be touched, and that they would find us advisors,” Yuchen Zhao said.

Kozlowski says that amid all the uncertainty, a few people adopted the group. Joshua Socolar was among them. The professor of Physics and hallway neighbor to the Behringer lab took an active role in managing the practical aspects of keeping the lab running.

“Warren and I tried to figure out how we were going to support the students, keep the grants going, keep the lab running,” said Socolar. “Everybody pulled together, but it took weeks, maybe months, until the dust settled.”

“It’s not like someone was assigned to take over the lab,” said Yiqiu Zhao. “We were given time to choose an advisor.”

“He was nearby in his office, we knew him well, he was familiar with Bob’s work, and he was very supportive of us,” Zadeh said. “It just made sense for him to be our advisor.”

Socolar had been connected to the Behringer group since his career at Duke began in 1992. Both shared an interest in the physics of granular materials, such as sand. While Behringer tackled the questions of how granular particles flow with experiments, Socolar tackled it with theory.

Karen Daniels, who was a postdoctoral researcher with Behringer and is now a Distinguished Professor of Physics at North Carolina State University, teamed up with Socolar, complementing his theoretical and computational background with her crucial experimental expertise.

Behringer’s last four students graduated successfully, with several publications each, and secured desirable positions. With their work, Behringer’s influence continues to spread across the world, through the successful careers of his almost 50 graduate students and postdocs alums.

While these students wrapped up their dissertations, they also slowly dismantled the physical lab. As is often the case, each cabinet was filled with little treasures, anecdotes and glimpses into the lab’s past.

Some took a tragicomic turn: vials of mercury, remainders of Behringer’s old experiments with fluid dynamics, led to a chemical accident that warranted the visit of Duke’s Chemical Spill Response team.

“This was sort of a closet room on the end of the hall that nobody frequents, thankfully, but we just found mercury in all crevices and corners. There were literally people in hazmat suits coming and going,” said Kozlowski.

A few findings were simply puzzling, such as the bed frame hidden in a corner, or the guitar found high up on the shelves. Others were historically interesting, such as piles of lab notebooks, printed photos of long-gone experimental results and old laboratory equipment.

Some findings, however, didn’t belong with surplus.

“I found a thermal bottle with a Duke logo on it that Bob used for his coffee,” said Yuchen Zhao. “I kept it as a souvenir.”