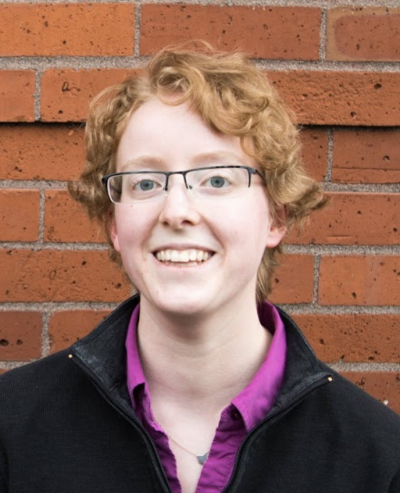 If you ask Duke physicist Natalie Klco, most computers in use today get nature all wrong.

“Nature at its core is not a deterministic set of ones and zeros,” Klco says.

To really understand how nature works, particularly at the subatomic level, the assistant professor is trying to figure out if quantum computing -- now expanding at Duke and elsewhere -- might do better. The hope, she says, is to tackle problems that even the world’s fastest supercomputers haven’t been able to address.

Klco is a theoretical nuclear physicist. She develops mathematical models and computer algorithms for understanding the smallest things known to science: quarks, gluons, protons and other parts of the subatomic world.

These are the basic building blocks from which all matter is made. But nature at this scale can defy intuition. These “Legos” of the universe appear to follow different rules than the parts of the world we can see or touch.

This partly explains why, when it comes to simulating more than a handful of particles and their complex interactions, the mathematics get hairy, fast.

Calculating the properties of nature using the language of its smallest scales -- such as the interactions between quarks and gluons -- requires mind-boggling amounts of computer power.

We can land a spacecraft on the moon, but we can’t keep track of the quarks and gluons swarming inside even the modest-sized nuclei forming the base of our terrestrial life. Classical computers aren’t up to the task.

Klco says the basic idea behind her research is to work with, rather than against, the quirks and complexity of the subatomic world to process information more efficiently.

“If I had the opportunity to delve into this frontier of ocean depths, I would want to work with these amazing creatures,” Klco says. “Just as nature has developed expert explorers of such high-pressure aquatic environments, nature has also created expert explorers of the quantum world. Working with them for the efficient exploration of quantum systems is one major goal of quantum simulation.”

“I think of my research as pursuing deeper understanding and respectful mimicry of the way that nature processes information,” Klco says.

Klco and other researchers wonder if quantum computers might offer a way forward. First eloquently expressed in the 1980s by physicist Richard Feynman, these devices harness the laws of quantum mechanics -- the same rules governing the building blocks of matter themselves.

Classical computers like the ones in our smartphones and laptops encode information in bits which can be either 0s or 1s. In contrast, a quantum computer works with quantum bits, or qubits, which can represent a 0, a 1, or any combination of the two at the same time -- a concept known as superposition.

Researchers can also generate qubits that are “entangled,” so that the state of one qubit -- say, the polarization of a photon -- can be modified, or even determined, from the state of another, without having to measure it directly.

These bizarre properties could enable quantum computers to run certain calculations significantly faster than their classical counterparts can accomplish alone, and together even solve puzzles that have so far proved intractable.

Klco’s interests aren’t limited to nuclear theory and quantum tech. In fact, one of her first loves wasn’t science at all -- it was music.

She started playing drums as a kid growing up in Canton, Ohio, but was soon coaxed into trying the marimba, an unwieldy xylophone-like instrument that can tip the scales at a quarter of a ton.

Despite initial reservations, the rich velvety vibrations of the rosewood bars, the cerebral puzzles of mastering challenging performance techniques, and the meditative thrill of playing had her hooked.

“I used to have hours of music in my head and at my fingertips,” Klco says. “The marimba became the language through which I processed life and connected with the world, with others, and with myself,” Klco says. “I don’t know what it is exactly. It’s just satisfying to my soul.”

“The marimba is also a very pattern-oriented instrument, which my brain likes,” Klco says.

“For percussionists, there is so much beauty and expression in the discretization and rhythmic manipulation of simulated time. It is for this reason that, I am often intrigued by the numerous, though sometimes subtle, intellectual parallels between quantum simulation and music performance."

By the time she got to college, at Ohio University, she was juggling an intense schedule of labs and rehearsals as a double major in physics and music. These dual passions culminated in theoretical physics research publications and the development of mental rehearsing techniques demonstrated by learning a 30-minute concerto while conducting physics research abroad.

“Employing visualization techniques not only elevates artistic excellence, but more importantly reduces the physical tolls that we demand from our bodies in the learning process. We use these bodies to do extraordinary things without giving them the time to evolutionarily adapt to the specialized strains,” Klco says.

“Once you have mastered your instrument, your body knows how to process performance information. New musical ‘software’ can be ‘downloaded’ without stressing the bodily hardware.”

“Entertainingly, the focus on mental work in preparation of performance is still a large part of my life, this time preparing for large scale quantum computers and their current predecessors,” Klco reflects, again connecting her musical past with her quantum mechanical present.

Klco then moved from Ohio to Seattle to pursue a Ph.D. in physics at the University of Washington, where she funneled her energies into late-night discussions about quantum field theory.

On a whim she took an evening class on quantum computing, and soon she was captivated with the question of how to converse in this strange new language.

“I became intrigued by this novel way of ‘communicating’ with the subatomic world while testing the applicability and foundations of quantum mechanics in the process,” Klco says.

Along the way she also studied other ways of communicating with patterns, including Braille, poetry and Morse code.

It’s been a century since the discovery of quantum mechanics, and some 40 years since researchers first proposed leveraging the theory for computation. And yet quantum computing is still in its early days.

“It's exciting and exhilarating to pursue such a dramatic change to the foundations of computing as we know it,” Klco says. “But it could be quite a long time until our visions for this technology come to full fruition. It’s a highly collaborative and long-term intellectual investment.”

But her personal motivations go deeper. “I'm hoping this work will be inspirational for the way that we design large-scale quantum computers, but it's also just fundamentally interesting. It’s distilling information processing into fundamental principles of the way that nature truly works.”

After a postdoc at Caltech, she moved to Durham this summer. On her walks she’s been continuing a project that started as yet another way to appreciate the intricate natural beauty around her -- snapping intimate shots of tufted lichens, craggy tree bark, fallen leaves and other small-yet-powerful features with her camera.

“There's so much incredible detail surrounding us,” Klco says. “If you want to do meaningful calculations of nature and express nature as it is, then you must have this complexity in the system. You can't oversimplify it.”