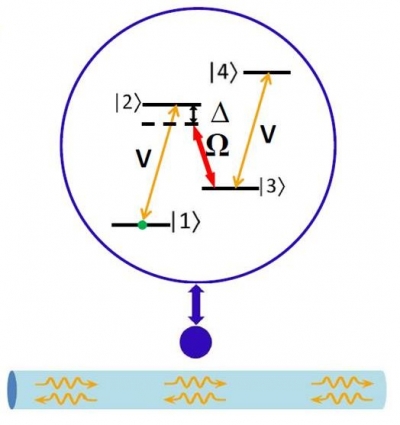 Prof. Harold Baranger is delighted to announce that his student and fourth year graduate student Huaixiu Zheng has won a prestigious Duke award: the John T. Chambers Scholar award of the Fitzpatrick Institute for Photonics (FIP) which is part of the Pratt School of Engineering. Huaixiu's main work here at Duke is on a new area of quantum optics and condensed matter physics called "waveguide quantum-electrodynamics" (waveguide QED). The idea is to have photons (or some other kind of bosons) which are confined in one dimension in a waveguide interact strongly with a quantum two-level system. This gives rise to many-body bound state effects which then cause a variety of interesting and potentially useful nonlinear quantum optics effects ("photon blockade" is one example). A wide variety of experimental systems are potentially available for observing these effects: a metallic nanowire coupled to a quantum dot, cold atoms trapped in a hollow fiber, a photonic nanowire with an embedded quantum dot, and a 1D superconducting transmission line coupled to a flux qubit. Huaixiu's work in this area is done in collaboration with Prof. Baranger and Prof. Daniel Gauthier.

Huaixiu has published one paper on the subject so far, "Waveguide QED: Many-body bound-state effects in coherent and Fock-state scattering from a two-level system," Huaixiu Zheng, Daniel J. Gauthier, and Harold U. Baranger Phys. Rev. A 82, 063816 (2010) and a second is submitted and available on the arXiv, "Cavity-free Photon Blockade Induced by Many-body Bound States," Huaixiu Zheng, Daniel J. Gauthier, Harold U. Baranger. 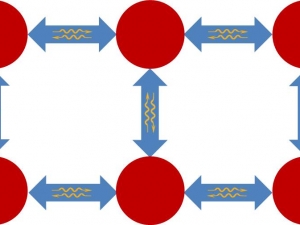 ​Huaixiu's proposal, which was a big factor in winning the Chambers Scholar award, was entitled "Towards Cavity-free Open Quantum Networks." Here is a brief summary of his proposal:

"Since Richard Feynman, it has been a dream of quantum physicists and engineers to build a quantum network, based on which a quantum computer could be constructed for large-scale quantum computation, and a quantum internet could be realized for faithful information processing over long distance. As shown in Fig. 1, a quantum network consists of local quantum nodes that are interconnected through quantum channels. The standard way to proceed toward such a network is to use a cavity-QED system; such an approach is technically very challenging. I propose to  study the quantum interface between photons and quantum nodes in a cavity-free one-dimensional (1D) waveguide system (see Fig. 2a)."

More information about the Chambers Scholars program can be found here on the FIP website. Huaixiu is a winner for the period August 2011 - July 2013.