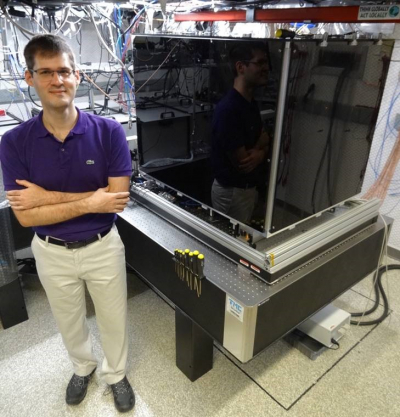 In July 2021, Marko Cetina will join Duke University’s Department of Physics as an Assistant Professor. An atomic, molecular and optical physicist, Cetina has used his wide-ranging research in light, lasers and atoms to both explore the basic physics of quantum phenomena and support the development of improved technology necessary for today’s leading quantum machines.

Cetina will come to Duke from the University of Maryland, where he worked at the Joint Quantum Institute alongside Chris Monroe, who joined the Duke faculty in August. Born in Belgrade, Serbia, Cetina came to the United States as an exchange student in high school. He later studied applied physics and applied and computational mathematics as an undergraduate at Caltech, then completed his Ph.D. in physics at MIT, where he worked next door to Ken Brown, now an Associate Professor of Electrical and Computer Engineering and Physics at Duke.

When he started at MIT in 2004, Cetina wasn’t working on quantum computing. “I was focused more on exploratory physics—quantum simulation and basic atomic physics,” he said. But he was using a similar system to the one he now oversees at Maryland, and from that early time began contributing essential technological insights that have grown the field.

Much of the difficulty and expense in quantum computing with atomic ions arose from the fragile, expensive lasers needed to trap and manipulate the individual ions—a process at the core of creating the “qubits” that give quantum computing its immense power. But Cetina showed how diode lasers—originally developed for Blu-ray players—could be used to trap ytterbium ions (the workhorse atoms for quantum computing at Duke, UMD and other institutions), greatly reducing the complexity of these systems. He was also part of the early effort to develop planar ion traps, which lend themselves to miniaturization using microfabrication techniques—an effort that was spearheaded from its early days by Duke Professor of Electrical Engineering and Physics Jungsang Kim.

These developments have proven essential for creating more advanced quantum machines. In just over a decade, quantum computers have gone from several qubits to several dozen. “Now, we have systems that can fit on one table,” Cetina said.

Cetina has looked for ways to further improve quantum technology by bridging different quantum systems. Laser-cooled atoms have been combined into large systems with many quantum particles. Meanwhile, charged ions allow unprecedented control over both isolated quantum particles and their interactions. As a graduate student at MIT, Cetina built the first bridge between those two kinds of systems, trapping both cold neutral atoms and cold charged ions in the same spot and exploring their interactions.

Later, as a postdoc at the University of Innsbruck, Cetina used many ultracold atoms to simulate quantum phenomena. In real materials, the quantum interactions that take place when atoms are suddenly excited—like with a powerful laser—occur on an attosecond time scale (or 10-18 of a second). “It is challenging to understand this sort of thing in a real material,” Cetina said. Instead, he replicated those interactions in a thin vapor of lithium and potassium atoms, but on a microsecond time scale—something slow enough for electronics in modern cell phones to handle. “Thanks to a new technique we used, we were able to observe these processes in real time,” Cetina said. “We hope this will elucidate some of these processes in real materials and help developments in material science and technology.”

Most recently, Cetina worked with Brown and others to implement error correction codes on the quantum system whose construction Cetina led at Maryland. “We all know these quantum systems are subject to noise and errors,” Cetina explained. “They’re fragile. You know, you open the box and see whether the cat is alive or dead, and the box gets inadvertently opened all the time. How do we protect against that?” Drawing on Brown’s leading work in the field, Cetina was part of the team that put robust error correcting codes into practice.

It’s that team approach that will guide Cetina’s work at Duke. By joining longtime collaborators Monroe, Brown and Kim at the new Duke Quantum Center, Cetina hopes to continue expanding the possibilities of the field by bringing in scholars from a wide variety of disciplines. “That multidisciplinary effort is what I see happening at Duke, and this is what we need to build larger systems. As Chris phrased it: ‘I want to build it.’ I knew exactly what he meant, and that it was an audacious thing to say. I said, ‘I want to help you.’”

In building it, Cetina will focus on two avenues. The first is continuing his exploration of hybrid quantum systems, hoping to combine the number of individual particles achievable in cold atom platforms with the level of control achievable using trapped ions.

The second is using the team’s existing quantum platform to develop improved quantum computers. “The system we built, we can tune and control with great precision,” he said. “By tuning the knobs, we can try to figure out experimentally what is limiting it.” That process may provide shortcuts to building ever more advanced quantum computers, allowing Duke to compete with the larger industry players who are currently investing in the field.

But Cetina still retains his longstanding interest in using this emerging technology to study basic physical processes. He hopes to use quantum simulations to model natural systems like photosynthesis and high-temperature superconductors, among other things. “I should have added to Chris, ‘And I want to do physics with it,’” Cetina said.