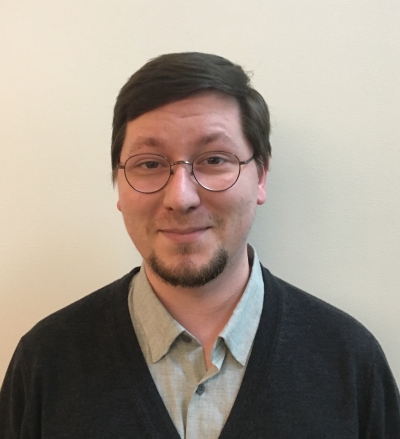 “My business is understanding how the universe evolves, what it’s made of, and what its fate is going to be,” says Michael Troxel, assistant professor of physics at Duke beginning January 1, 2019.

Troxel is working to find and quantify dark matter, which in turn will help elucidate just how much dark energy there is. Dark energy is the unknown form of energy that is causing the universe to expand at an ever faster rate.

Even though dark matter is invisible, it weakly distorts light traveling through space. The distortion, called weak gravitational lensing, can be used to infer the presence and amount of dark matter. Troxel began using weak gravitational lensing to probe the universe while completing his PhD under the advisement of Mustapha Ishak-Boushaki at the University of Texas at Dallas.

Now Troxel is looking for weak gravitational lensing in the data from a hundred million galaxies that’s coming out of the Dark Energy Survey (DES), an observatory in the Andes. DES is surveying one-eighth of the sky over the course of 525 nights in unprecedented detail, gathering data on 300 million galaxies and thousands of supernovae.

This kind of cosmological research is a new focus at Duke Physics. Troxel will be helping to build a new program in cosmology along with Chris Walter, professor of physics, and Daniel Scolnic, who is also joining the faculty in January 2019.

Walter, who recently shifted the focus of his research from particle physics to cosmology, explains that with the advent of large international collaborative observational projects in the past few decades, it’s now possible to create a strong program at a university with fewer people than would have been necessary in the past.

“The department and the university realized that’s something we can do, so we started to try to build a really strong group in cosmology,” Walter says. “It’s an exciting field with some of the most interesting questions of the time, and we can have a big impact by having the best people working on it.”

Troxel is looking forward to collaborating with Scolnic, who analyzes supernovae to infer the expansion rate of the universe at different times. “We will soon be combining our work into a combined constraint using DES data that will tell us nearly as much about dark matter and dark energy as all other cosmological measurements ever made combined,” he says.

In addition to DES, other international collaborations will soon be pumping out huge data sets as well, including the Large Synoptic Survey Telescope (LSST) and the Wide Field Infrared Survey Telescope (WFIRST).

For the new cosmology program, dealing with this fire hose of information will be facilitated by the Information Initiative at Duke, an effort to share information and techniques across disciplines to make the most of big data.

“The really exciting thing about Duke is the ability to work across traditional subject lines [with the Information Initiative],” Troxel says. “It’s an unsolved challenge how to take advantage of these huge data sets. Just managing that data and the statistics necessary to extract information from it is pretty cutting-edge. The group we’re building at Duke will have a great impact in these unsettled pieces of analysis.”

Troxel is also looking forward to teaching and mentoring students at Duke and in the community. He hopes to get involved at the North Carolina School of Science and Mathematics, a public boarding school in Durham for North Carolina juniors and seniors.

Troxel attended a similar high school called the Missouri Academy of Science, Mathematics and Computing. He calls it a formative experience. “It was the first time I had gotten to be around people smarter than I was,” he says. “I grew up in a lot of ways that weren't possible at home, not just academically, but morally and personally. No one I knew in my family had gone to college--my father hadn't even finished high school. I don't know that I'd have accomplished what I have without those experiences at the Academy.”

He thinks the kinds of questions he finds so fascinating will also be engaging to students. “We all want to know where we came from and where we can go in the future,” he says.