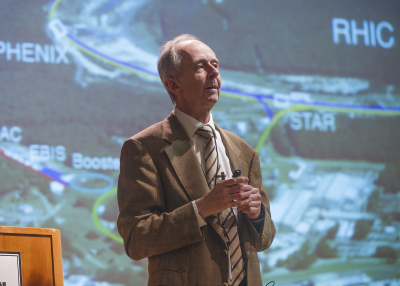 When he received the email announcing that he had won the 2021 Herman Feshbach Prize, Berndt Mueller was in the hospital recovering from surgery. “Suddenly I get that email,” Mueller said. “It was totally unexpected.”

Awarded each year by the American Physical Society, the $10,000 Feshbach Prize honors “outstanding research in theoretical nuclear physics.” Mueller was selected for his contributions to the scientific understanding of the quark-gluon plasma that filled the universe shortly after the Big Bang, which has proven fundamental to ongoing research at particle accelerators around the world.

Born and educated in Germany, Mueller came to the United States to join the Duke faculty in 1990. He was drawn to the country in large part by the prospect of the construction of an accelerator at Brookhaven National Laboratory that could be used to perform high-speed collisions of atomic nuclei, which began operations in 2000 as the Relativistic Heavy Iron Collider.

Since the 1960s, scientists have known that the early universe—less than a second after the Big Bang—was extraordinarily hot, exceeding 7 trillion degrees Fahrenheit. At such high temperatures, they hypothesized that protons and neutrons couldn’t survive and the universe instead consisted of a plasma made up of “free” quarks and gluons, the subatomic particles that hold protons and neutrons together.

The RHIC was able to test that hypothesis by heating two atomic particles and smashing them together at high speeds. Their kinetic energy is then converted into heat, offering a chance to recreate some of the conditions of the primordial universe.

During the RHIC’s construction, it wasn’t clear whether the experiment would work, nor how scientists could observe the result, given the speeds and temperatures involved. While many looked indirectly, using other particles released by the collision as signals, Mueller theorized a more direct approach. “I was thinking, ‘How could you use observables that are directly related to the quarks and gluons to figure out first of all if it’s plasma, and second of all what its properties are,” Mueller said. His solution was using hadrons, subatomic particles made out of quarks and gluons.

Time has proven Mueller’s approach correct. “The original predictions made 20 years ago have been verified to a remarkable extent,” Physics chair Steffen Bass wrote in his nomination of Mueller. “This work […] laid the foundation for major experimental programs” at Brookhaven and CERN, Bass added, including the Large Hadron Collider.

Mueller’s work—carried out with several students, postdocs, and colleagues over the years—has also helped explain some of the puzzling findings from more recent collider experiments. “We made a number of predictions that initially we thought to be outlandish, but that were logically consequences of forming a quark-gluon plasma,” Mueller said.

Chief among those was the behavior of the plasma. While plasmas typically act like gasses, this plasma is dense and behaves like a nearly perfect liquid. Mueller’s work showed that the liquid that flows is really made up of individual quarks. “Over the following 15 years, every single experiment that could have either corroborated or refuted that finding has confirmed it,” Mueller said. “Much of the credit goes to my theoretical collaborators over the years, but also to the remarkable experimentalists who recorded and analyzed the data that allowed confirmation of the predictions.”

That discovery has led to further surprising insights. One of the core theoretical questions Mueller has worked on is why two atomic nuclei colliding creates heat at all—why they don’t simply pass through each other “like two clouds of dust,” Mueller said. Mueller and his collaborators found that a mathematical model from superstring theory can be used to model that conversion into heat, even though string theory was invented to describe completely different processes. The same model also explains how “the conversion of energy from motion into heat and the near perfect liquidity of the system go hand in hand.”

The ability to combine real-world observation and mathematical models has defined Mueller’s research throughout his career. “I like to look at critical, not understood questions and relate them to observations that are specific and clear cut and try to understand how they shed light on each other,” he said. But he doesn’t know yet what the next questions will be.

Mueller has spent the past seven years as the Associate Laboratory Directory at Brookhaven, managing a facility with more than 750 staff. But at the end of the year he will return to teaching and researching at Duke full time. “I still have to make up my mind about what I want to be looking at,” he said. “It has to fascinate me. I don’t want to make a prediction, but I’m sure I will decide over the next few months.”