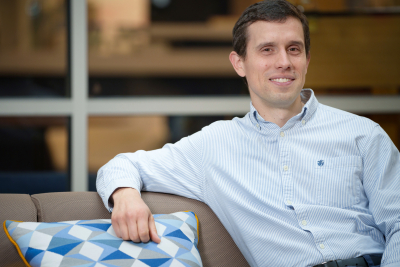 How do you build the perfect cage for something you can’t see? Ask Norbert Linke, assistant professor in the Department of Physics.

Trapped ions are a gateway to more complex quantum systems. Unlike almost any object around us, particles at the atomic or subatomic level don’t follow the classical laws of physics. Particles at the subatomic level operate according to their own laws, which involve probabilities rather than precisely quantifiable properties, making their behavior hard to predict.

“Everywhere you have zillions of atoms coupled together, so there might be quantum behavior in there, but you wouldn't really observe it,” said Linke. “But if you can isolate the atoms from each other and from the environment, then you can actually see that quantum nature and make use of it.”

Linke’s ion traps allow him to do precisely that. By stripping atoms of one of their electrons, they become electrically charged and can be trapped using electrical fields. The quantum behavior of these ions can then be studied and controlled in detail, and their potential applications can be explored.

Because quantum mechanics involve two counter-intuitive ideas — superposition, or the fact that a quantum system can be in multiple states at the same time, and entanglement, or powerful correlations shared between systems — the capabilities of quantum systems go beyond what classical physics has to offer. Instead of a computer bit being 1 or 0, as in classical binary system, it can be both at once in a quantum system.

“It probably won't be able to solve all problems for you,” said Linke, “but it can extend our power to study natural phenomena, to solve complex computation problems and so on.”

In his previous position as an assistant professor of physics and fellow of the Joint Quantum Institute at the University of Maryland, Linke put trapped ions to the test. In one of his experiments, the quantum states of trapped ions were used to store bits of information, so-called quantum bits, and execute quantum circuits.

By exciting the ions individually with ultra-focused laser beams, such circuits can then be used to test and run simple algorithms and simulate more complex physical dynamics, like a small quantum computer.

This specific experiment was first developed under Chris Monroe, Gilhuly Family Presidential Distinguished Professor of Electrical and Computer Engineering and Physics and director of the Duke Quantum Center, and Linke’s postdoctoral supervisor at the University of Maryland. Linke has been testing the experiment’s potential applications, collaborating with scientists across the world to demonstrate new algorithms for the system to solve.

He specifies that this experiment doesn’t yet have any capability that a simple, classic computer wouldn’t offer. But it allows us to learn more about how to employ the laws of quantum physics to build, improve and scale quantum technology.

At Duke, Linke will expand on the capabilities of this system, and the field of ion trapping as a whole, by improving the trap itself. His lab is currently working on designing the “perfect” ion trap, made of etched glass, which would guarantee well controlled, symmetric electrical fields and therefore precise control over the ions.

In 2015, he moved to the United States to work as a postdoctoral researcher with Monroe, one of the world’s leading authorities in the field of ion trapping. This background puts him in an ideal position to combine the advantages of the two current methods for building ion traps, microfabrication and larger hand-assembled traps.

A lot has changed in Linke’s life since that first postdoc seven years ago: “I moved to the U.S. with a couple of suitcases,” he said, with a laugh, “and now I have two daughters and I’m here waiting for my moving container.”

Linke also has a full lab with six graduate students, one postdoc and one research scientist, most of whom are joining him in Durham. One of his graduate students and his postdoc are already working on the setup needed to test the etched glass ion trap at the Duke Quantum Center’s lab in the Chesterfield building.

“We are very excited to have Dr. Linke join Duke,” said Steffen Bass, Arts and Sciences Distinguished Professor of Physics and chair of Physics. “His expertise in ion trapping and its applications to quantum information science will significantly strengthen Duke Quantum Center and will cement Duke’s leadership position in quantum information science.”

North Carolina and the Research Triangle aren’t all new to Linke, though. He has explored the state in ways most of us wouldn’t be familiar with: amateur radio direction-finding races.

Participants engage in a mix of orienteering and radio frequency detection, using maps, compasses and radio apparatus to search for radio transmitters in wooded areas, such as Umstead Park.

“There is a very active community in this area,” he said, but the radio direction-finding community isn’t really what brought him to Duke.

“For ion trapping particularly, but also for anything to do with quantum technology, the Duke Quantum Center will be one of the top places in the world,” he said. “Coming here was definitely a unique opportunity.”