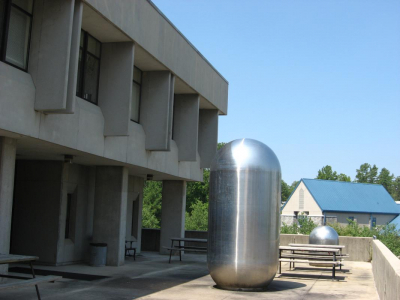 The Triangle Universities Nuclear Lab is one of four DOE Centers of Excellence in nuclear physics in the country. (Department of Physics)

The Triangle Universities Nuclear Laboratory (TUNL) has received an award for $1.5 million from the U.S. Department of Energy (DOE) to upgrade a critical component of one of its particle accelerators, the tandem Van de Graaff accelerator.

If you’ve ever been to a science museum, you may have seen a miniature Van de Graaff generator. They often look like a sphere on top of a pedestal. If you touch them, your hair stands straight up on your head, showcasing one of the most entertaining effects of a low-voltage electric field generation.

The TUNL’s Van de Graaff’s accelerator isn’t the classroom type, though. It has a terminal voltage of 10 million volts, almost 85 thousand times the voltage of a standard wall outlet. This high voltage can propel electrically charged ions with enormous speed and focus them into high-energy beams, giving researchers a way to study the structure, nature and dynamics of the subatomic particles that make up everything around us.

Because charges of the same polarity repel, these positively charged ions are then accelerated away from the terminal. The resulting beam consists of particles that were accelerated twice, once by attraction to the terminal, once by repulsion.

Thanks to this DOE award, TUNL will upgrade their accelerator’s beam-injector system.

“The enhanced beam capabilities will enable TUNL to continue defining the low-energy research frontier,” said Calvin Howell, professor of Physics and one of the faculty leading the awarded research proposal.

He says that the new beam-injector system will enable new research opportunities in nuclear astrophysics, nuclear structure, few-nucleon physics and applications in nuclear security and particle detector research and development.

The benefits of having a new beam-injector system don’t stop at cutting-edge research. TUNL offers educational and research opportunities to undergraduate and graduate students across the Triangle, as well as nationally through its summer research programs.

“This upgrade will provide students and young scientists unique hands-on opportunities to be involved with cutting-edge technologies in the field,” Howell said.

The two primary beam-injector upgrades included in the award are a Toroidal Volume Ion Source (TORVIS) and a Source of Negative Ions by Cesium Sputtering (SNICS-II). The TORVIS will inject ions into the tandem Van de Graaff accelerator at currents more than five times greater than the sources currently being used at TUNL. The SNICS-II will significantly increase the variety of particle beams available to researchers and will create new research opportunities for nuclear astrophysics and nuclear structure research.

This grant is a continuation of the DOE Office of Nuclear Physics’ investment in the accelerator facilities and research infrastructure at TUNL, which is one of the four DOE Centers of Excellence in nuclear physics. Another recent DOE award allowed the laboratory to upgrade the accelerator systems in its Laboratory for Experimental Nuclear Astrophysics.

Like most research conducted at TUNL, this grant was a joint effort between faculty at Duke, North Carolina Central University, North Carolina State University (NCSU) and the University of North Carolina at Chapel Hill (UNC). This grant proposal was led by Richard Longland, associate professor at NCSU, along with Howell and Robert Janssens, Edward G. Bilpuch professor of physics and astronomy at UNC and director of TUNL.