Undergraduates Are Doing Real Research in Trinity College, And Everyone Benefits 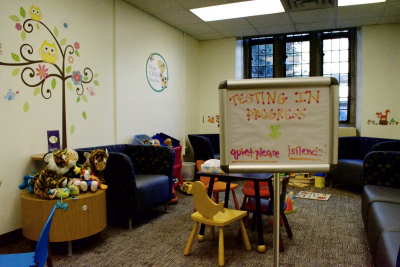 When you run scientific studies that include infants, something will always go wrong. Families will be late or sick. The babies won’t behave. Or maybe, as happened at the Wilbourn Infant Laboratory at Duke (WILD), you’ll have to make a last-minute run to the store to buy a big pack of toothbrushes.

In an interactive study, 20-month-old infants played with a variety of objects—things like a fake cookie and a toy apple, all of which the researchers had ensured were safe for infants. “We had it down,” said Makeba Wilbourn, the lab’s director and an associate professor of the practice of psychology and neuroscience. But there was also a toothbrush.

“What does the kid do? Put the toothbrush right in its mouth,” Wilbourn said. “Of course they did! But we only had one toothbrush. It never dawned on us.”

It was a small problem, but Wilbourn uses it to teach a big lesson: conducting research means responding to myriad minor crises by drawing on a wide variety of specialized forms of knowledge (including what infants will do when they find something as novel and exciting as a toothbrush). That’s why Wilbourn and others across Duke make it a priority to create opportunities for undergraduate students to participate in real research projects. It leads to learnings that can’t be replicated in the classroom.

“There’s no cheat sheet,” Willbourn said. “There’s no magic formula. You just have to buckle up and go through it.”

Finding a Pack in the WILD

Each semester, Wilbourn typically has between 10 and 15 undergraduates working in her lab. Three or four each year use WILD as the home for the independent research projects they need to graduate with distinction, and still more pass their findings onto future generations of undergraduates who spin them into new research.

All of this works, Wilbourn stresses, because WILD fosters an intellectual community. “We give students agency with scaffolding,” she said. “You give them agency, but you also create an environment that shows we’re all in this to together. It’s not my project. It’s not the student’s project. It’s our project. We’re all invested in it.”

“Not only have I been able to do my own honors thesis research project, but more importantly I have found an amazing community of strong, determined, intelligent women to surround myself with,” said Alexandra Chan, a current undergraduate. “And I think that’s been a defining part of my Duke experience.”

These networks are especially helpful for first-generation and underrepresented students, Willbourn said. They receive more personal letters of recommendation and learn what to look for in graduate programs. To ensure those students can find out about WILD and other opportunities, Willbourn has partnered with professors Sarah Gaither and Greg Samanez-Larkin to run “Lifespan Approaches to Diverse Psychological Science.” The National Science Foundation–funded program that offers paid research experiences to students from groups underrepresented in science, first-generation college students, and students who have limited access to research opportunities or attend non-research-intensive universities, historically Black colleges and universities, Hispanic-serving institutions, or tribal colleges and universities.

The community keeps giving back to WILD, too. Some students who worked in the lab as undergraduates four years ago are now PhD candidates, offering advice to current students. Other alumni have even sent their master’s thesis to WILD student groups for feedback.

And students also learn the soft skills necessary for success in many fields. “We have an incredible student population,” Wilbourn said. “These kids are bright and motivated and determined, but they are often afraid of making mistakes. The reality is, we grow the most and we learn the most when things don’t go the way we planned.” The research experience is an unparalleled way to figure out how to make the most of those mistakes.

If anybody understands the impact research can have on a career, it’s Sara Haravifard.

As an undergraduate at McMaster University, Haravifard was interested in physics. But more than that she was looking for a summer job when she was recruited to work in her professor’s lab. Once there, she was valued as a team member like any other. Her colleagues asked for her opinion. They gave her real tasks to perform as part of the lab’s research.

“I saw my own progress, then I got really interested,” she said. Eventually, she completed her PhD under the same professor.

Today, as the William M. Fairbank Assistant Professor of Physics, Haravifard runs her own lab, where her team works to identify materials that can be used as superconductors. Following a circular path of equipment around the lab, researchers melt materials down, turn them into powders, purify the powders into a crystal, and use a diamond-laced wire cutter to cut the crystals along a precise plane. Then they send their samples to national labs for neutron scattering studies to learn about their “frustrated quantum spin” properties. It’s a complex process, but every semester three or four undergraduates work side by side with PhD students and postdocs.

“I like doing the practical stuff and the experimental side of it,” said William Smith, a junior majoring in Mechanical Engineering and Materials Science, with a secondary major in Physics. “My classes give me the tools and background that will be necessary for whatever work I end up doing, but participating in research really grounds everything in reality—reminding me that I’m not learning a bunch of abstract self-referential nonsense, but practical, insightful material that deepens my understanding of the world around me and helps me to approach technical challenges more prepared, more informed, and, I hope, more creatively.”

“It’s awesome to have them here,” said William Steinhardt, a graduate student in Physics, noting that some have even joined trips to national laboratories around the country.

Steinhardt, who attended a small liberal-arts college, wasn’t able to do his own research until he graduated and joined private industry. He says the collaborative atmosphere in Haravifard’s lab, in which all lab members have a shared interest in the success of the project, sets Duke’s undergraduate research opportunities apart from his experience. “There’s a lot more opportunity [at Duke] to have actively engaged mentoring,” he said.

But mentoring isn’t just a benefit for undergraduates. “Sometimes you learn best when you’re teaching,” Haravifard said. In working with undergraduates, the lab’s graduate students enter into a dialogue that improves their own scholarship. Postdocs also benefit from the experience of managing a lab. “It’s very important because it’s training for what’s coming up when they want to have their own students,” Haravifard added.

What ties researchers of all experience levels together is the curiosity required to follow through on a project. The same thing is true in the humanities, which Paul Jaskot, a professor of Art, Art History & Visual Studies and the director of the Wired! Lab, explains by describing the experience of Paloma Rodney.

A senior and a Wired! Fellow, Rodney is working on a project about the community around Raleigh’s Central Prison. “It’s this monumental architecture from the 1870s,” Jaskot said, and Rodney’s project looks at “how that might have impacted the experience—of what the prison meant as a lived building, not just an architectural landmark.”

Rodney wasn’t always interested in architecture, though. She was planning to major in computer science when she signed up for a Wired! project, so her first task was to build a data set. But then Rodney began exploring other aspects of the project. “She’s become more interested in the sociological questions. She’s become much more interested in the visual element,” Jaskot explained. She later switched her major to Visual and Media Studies with a minor in Computer Science (as well as Spanish).

“My experience with Wired! Has been nothing short of amazing,” said Rodney. “When I first started [at Wired!], I learned how to think analytically and critically about real-world problems, as well as the importance of collaboration. Now, as a senior, I am learning how to teach younger members of the team the same analytical and critical skills I had to learn.”

Rodney’s story is typical at the Wired! Lab. Undergraduates from across the university join projects and courses, or simply attend open sessions on Fridays. Students are able to follow their interests in new directions, taking ownership of their own innovative projects, and in the process expanding their intellectual interests.

Welcome to Wired! from Wired! Lab at Duke on Vimeo.

Crucially, they also get to see the impact. One exhibit that grew out Wired! project with undergraduates – capturing how Venice was experienced in the 16th, 17th, and 18th centuries – was recently removed from its place on display in Rubenstein Library. It followed from a Venice show previously held at the Nasher Museum, which also displayed “Cultures of the Sea: Art of the Ancient Americas” earlier this year, another exhibit connected to student research in the Wired! Lab.

“Students see how they can find their own interest in research,” Jaskot said. “It’s not a paper they have to write for class. It’s not an assignment they have to do. It’s about meeting with a team and saying, What am I interested in doing in research?”

“That fresh perspective is essential,” Wilbourn said. “They bring nuance that goes away as they become experts. I tell them: You are pivotal in research. Your opinion and your insights are incredibly valuable because you haven’t been doing it this long.”