Capturing secrets of the Universe on a silicon chip 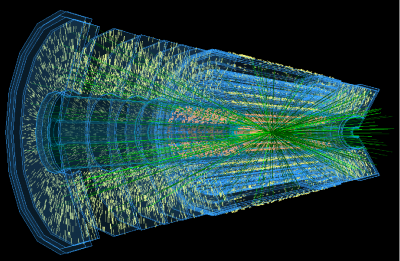 Rendering of a collision of particle beams at the LHC (Credit: ATLAS Experiment © 2021 CERN)

Imagine taking a snapshot of the Big Bang with a computer chip. Ashutosh Kotwal, Fritz London Professor of Physics at Duke University, thinks we may have a first step in that direction.

In a paper published last week in the journal Nature Scientific Reports, Kotwal melds two fascinating ideas from technology and physics - the use of artificial intelligence and machine learning for image recognition and the search for dark matter, the mysterious stuff that makes up 84% of the total amount of matter in the universe.

As a particle physicist, Kotwal is pursuing the hypothesis that dark matter is made up of exotic particles – particles that are poorly understood or that don’t behave according to the known physics laws. Just like electrons, protons, neutrons and neutrinos, such stable dark matter particles would have been produced in a fraction of a second after the Big Bang, in those early moments when the universe was extremely hot.

The Large Hadron Collider (LHC) at the CERN Laboratory in Switzerland, the world’s highest energy proton-proton collider, helps physicists study and understand how exotic particles are produced. Could some of the processes active at the time of the Big Bang also occur at the LHC, leading to dark matter production? And if so, how can we catch these processes in action?

The catch is that dark matter by its very nature interacts very weakly with ordinary matter. In fact, all we know about dark matter is that it obeys the law of gravity. Its gravitational effects in and around the galaxies of the cosmos have been observed. However, the gravitational force is far too weak to help observe the dark matter in an experimental detector on Earth. And we do not know if dark matter experiences any other force.

Kotwal is pursuing another possibility. In particle physics a number of heavy, short-lived elementary particles have been discovered over many decades, through their production at high-energy accelerator experiments, such as those conducted at the LHC. These heavy  particles decay to stable electrons, neutrinos and the quarks, which are bound inside protons and neutrons. What if dark-matter particles also arise from the decay of heavier exotic particles, which could be produced at the LHC? If these heavier cousins of the dark-matter particles were electrically charged, they would be produced at the LHC in vast numbers.

In this new study, Kotwal proposes a method to observe the production of these heavier charged cousins and their decay to the dark-matter particles. The method provides a rapid recognition of the pattern of ephemeral traces deposited by charged particles as they traverse the layers of silicon sensors in the LHC experiments, essentially forming a massive and extremely fast digital camera.

The challenge is that these digital images are very dense and are generated at the rate of 40 million images per second. The traditional method of software algorithms running on a computer takes a few seconds to process one complete image. A large enough computer farm would be prohibitively expensive. Enters Kotwal’s new approach.

Silicon transistor circuits, like those found inside computers, televisions and phones, are actually incredibly fast. What if the task of analyzing the huge image could be broken down into a very large number of identical artificial intelligence (AI) engines, and all these engines could be built directly on silicon chips? These AI engines would run very fast, and a large number of them could fit on a single chip. Most importantly, in Kotwal's design, all the AI engines would be running simultaneously.

Along these lines, Kotwal has come up with an algorithm that can be implemented on an integrated circuit. In essence, the collection of AI engines acts like a massively parallel computing machine which can tackle the image recognition task at the rate required by the LHC. Kotwal thinks that it can be built to operate hundreds of times faster than the other approaches that have been attempted so far.

The next step in this project is already in progress: putting together the integrated circuit design that implements his algorithm. Kotwal’s team, consisting of five Duke undergraduate students from engineering, math and physics, is using the latest design tools from industry. Kotwal expects this first circuit design to be published within a year. Recently, five more undergraduates have joined his team to work on the second-generation design, which is already being planned.

Kotwal says that the students are fascinated by the connections between the artificial intelligence concepts, the silicon chip technology and the ultimate goal in fundamental physics of understanding dark matter. His work is an example of how undergraduate students can contribute to research, working in integrative teams to answer big questions in science.