Exploring the Mysteries of the Universe by Seeing the Invisible 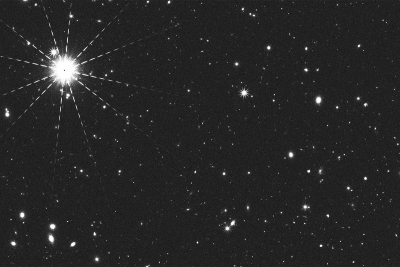 Michael Troxel has always liked puzzles, especially challenging ones. Which is fortunate, since his job is solving some of the most perplexing, fundamental mysteries of the universe.

“At some point in middle school I asked myself, What’s the hardest thing that I could try to do?” he said. “And at that point the hardest thing I knew about was astrophysics, so I think that was probably the first motivation for choosing this career, if I’m honest. But that was before I understood what it actually meant.”

A cosmologist and assistant professor in the Department of Physics, Troxel has spent the past two years as the cosmology analysis coordinator in the Dark Energy Survey—an international collaboration involving 500 scientists analyzing a massive dataset of about 400 million celestial objects. “It has been what I think is one of the most complex and difficult analyses ever performed in cosmology, which has only been possible with the contributions and leadership of dozens of my colleagues,” Troxel said. The outcome will span about 30 published research papers with more than 200 contributing scientists.

Today, in recognition of his contributions to the field, Troxel was granted an award through the Department of Energy Early Career Research Program. Founded to "bolster the nation’s scientific workforce by providing support to exceptional researchers during crucial early career years, when many scientists do their most formative work," the program will support 76 scientists in 2020. “It is a welcome validation that my time supporting this project has been well spent,” Troxel said. “It will also give my research group the resources to tackle some of the hardest problems we face in cosmology.”

The award offers five years of funding for a specific project, which Troxel will partly use to support his work on a successor to the Dark Energy Survey: research using the Vera C. Rubin Observatory Legacy Survey of Space and Time (LSST), which is scheduled to begin operations in 2023, within the Dark Energy Science Collaboration (DESC). Located in Cerro Pachon, Chile, the facility is one of the three large, state-of-the-art telescopes that will come online in the coming decade, including the Nancy Grace Roman Space Telescope that Troxel’s group also works with. “Rubin and Roman will do many of the same things that the Dark Energy Survey does, but 10 times better,” Troxel said.

All focus, in part, on the two most pressing cosmological mysteries left to solve: dark matter and dark energy. “They’re the pieces of the universe that we just don’t understand,” Troxel said. “And a bit frighteningly, they seem to make up 95 percent of the universe.”

The first, dark matter, is difficult to research because scientists have yet to see it—it doesn’t interact with light in the way ordinary matter does. But it does interact with gravity, and current astrophysical models—which have been very successful at predicting how the universe has evolved—imply that there is five times as much matter as we can see in the form of this dark matter.

Troxel specializes in gravitational lensing, or how gravity bends the path of light and distorts images of distant galaxies. By taking large-scale images of the universe from observatories like Rubin and Roman and analyzing those distortions, he can map where dark matter is located. Through the Dark Energy Survey, Troxel and others have made such maps for about an eighth of the sky. Rubin will allow them to map the entire southern hemisphere.

The other mystery, dark energy, involves the expansion of the universe. Since the Big Bang, all of the universe’s cosmological objects have been moving away from each other. Until the last few decades, scientists largely expected that the objects would slow down due to the gravitational force pulling them back together. But the opposite is happening.

“What we observed is that instead of slowing down, everything is speeding up and accelerating away from each other,” Troxel said. “This is like throwing a ball up in the air and instead of having it fall back down, it starts shooting up faster and faster.”

With the funding from his Department of Energy Award, Troxel said he will be able to hire another graduate student and postdoc to support Duke’s cosmology research, which also includes professors Dan Scolnic and Chris Walter, expanding the department’s recent focus on the field. One of the benefits for students is that they will have the opportunity to visit the observatory in Chile as the commissioning of Rubin starts.

It’s those opportunities to support future scientists that are most meaningful to Troxel. A first-generation student, Troxel credits those who supported his career for his current success. “My path to where I am now was not easy, and I only made it due to the support of my teachers and mentors,” he said.

But he also hopes to welcome a more diverse group of students into cosmology. “It was only last week [with the US Supreme Court ruling on Title VII], for the first time in my life, that I am protected at the national level from being fired from my job solely for who I am,” said Troxel, who is LGBTQ.

“The story of modern physics and cosmology has been one of turning around our perspectives and viewing the physical world in a new light, leading to fundamental new insights about how the world works,” he added. “Physics and cosmology benefit from new and diverse perspectives, but we must ensure that the field is worthy of those new voices. The most rewarding part of my role now as a teacher at Duke is to help make sure the next generation of diverse voices are heard and supported while they find their own paths to grappling with the mysteries of the universe.”