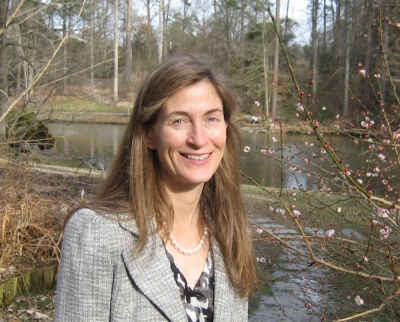 Duke physics alum Robin Canup, ‘90, has been thinking about moons—and their origins—ever since graduate school at the University of Colorado (CU). She was halfway through her PhD thesis on Saturn’s rings when, she says, “I got this idea that I wanted to start working on the origin of the moon. My thesis advisor was very supportive, so I changed the topic of my thesis. I’m forever grateful to him for that.”

In fact, he suggested that she send a grant proposal to NASA, with the result that she had funding for a postdoc at CU as soon as she graduated.

Since then, she’s proposed leading theories not just about our moon, but many other moons as well. “I’m best known for my work on the Earth-moon system because that’s the one that generates the most public interest,” she says. “But I’ve worked on the origin of all the big satellites in the solar system.”

Canup has been a scientist at the Boulder office of the San Antonio-based Southwest Research Institute (SwRI) since 1998. Today she’s Associate Vice President, managing all 80 SwRI scientists in the Boulder office. In 2012, she was elected to the National Academy of Sciences.

In February, she visited Duke to deliver the fifth Hertha Sponer Lecture, in which she spoke about her recent modeling of the catastrophic collision that created the Earth-moon system.

The model that had been around for decades proposed a smallish impactor (say the size of Mars) colliding with an Earth the size of today’s Earth. The problem? The debris field from the collision—the raw ingredients of the moon—would come mostly from the demolished impactor, which almost surely be compositionally different from the Earth. But in fact, the moon and the Earth’s mantle are made of the same stuff.

In Canup’s model, the impactor and the proto-Earth are about the same size (between 40-50% of the mass of today’s Earth). The collision destroys the impactor and deforms the Earth, mixing the materials of the two planets. When the dust settles in her computer simulation, what’s left is the Earth as we know it, surrounded by an orbiting disk of detritus similar in composition to the outer layers of the Earth. (Later, debris in the orbiting disks coalesces to form the moon.)

The only problem with this model is that it leaves the Earth with too much angular momentum—the Earth would be rotating at least twice as fast as it does today, giving us a much shorter day. However, recent work by Matija Ćuk and Sarah Stewart provides a fix for this problem by suggesting a resonant interaction between the moon and sun called evection resonance that would reduce Earth’s angular momentum enough to give us our 24-hour day.

Canup uses a computer simulation based on hydrodynamical equations of motion. Each of the colliding planets is divided up into about a million particles, and the simulation tracks each particle’s position, velocity, temperature, physical state, and gravitational interactions during the collision.

“It models the time of the impact through about 24 hours typically,” she says. “That’s how long it takes for the system to settle down into a central planet surrounded by a debris disk. Prior to that, the impactor might be partially intact and on a re-collision course with the Earth.” (Read more about Canup’s Hertha Sponer lecture and see a video of one of her simulations here.)

Moon formation around gaseous planets is totally different. As those planets formed, they captured hydrogen and helium gas that was orbiting the sun for a few million years in the early days of the solar system. Some of the gas was added to the planets, but gas with too much angular momentum formed broad rings or disks around the planets rather than falling into them. Particles in the disks came together to form solid moons.

Canup says as the moons formed, gas in the disks interacted gravitationally with them, causing their orbits to spiral in toward the planets. “One of the things I’ve discovered,” she says, “is that this process will tend to select for a certain mass of satellites around the planet. Independent of the total mass of rock and ice that’s delivered to these disks, you tend to form a satellite system that has 10-4 of the planet’s mass.” Canup calls it “one of the very odd things in our solar system” that even though Jupiter, Saturn, Uranus, and Neptune are so different from one another, all of them have the same mass ratio with their satellites.

Now that other astronomers are discovering exoplanets and starting to search for large satellites around them, Canup is interested to find out whether this same mass ratio will exist in other solar systems as well.

When Canup came to Duke from upstate New York, she planned to major in biology and become a physician. But her first physics class changed her mind. Then, in her sophomore year, she took an astrophysics course from John Kolena who also taught at the North Carolina School for Science and Mathematics. “He was one of the—if not the—best professors I had at Duke,” Canup says. “He was a fantastic teacher.”

When she went to graduate school, she didn’t have a clear vision for a career, but she soon realized how much she loved research. “The switch from solving abstract problems that have been solved many, many times to, ‘Here’s a problem and nobody knows the answer—go see what you can figure out,’ was a complete transformation for me,” she says. She also loved living in Boulder, so it was a happy coincidence that SwRI opened a lab in Boulder about the time she was looking for her first job.

She and her husband live in the foothills just outside the city limits on 45 acres, which they enjoy improving. Taking care of their two young children and working on their property in addition to their careers doesn’t leave time for much else. “That pretty much fills up every 30-hour-day, and unfortunately I only have 24 hours a day, so I get 6 hours behind every day,” she says.

While many professionals might say something similar, Canup is one of the few who can explain why and how she only has 24 hours a day.